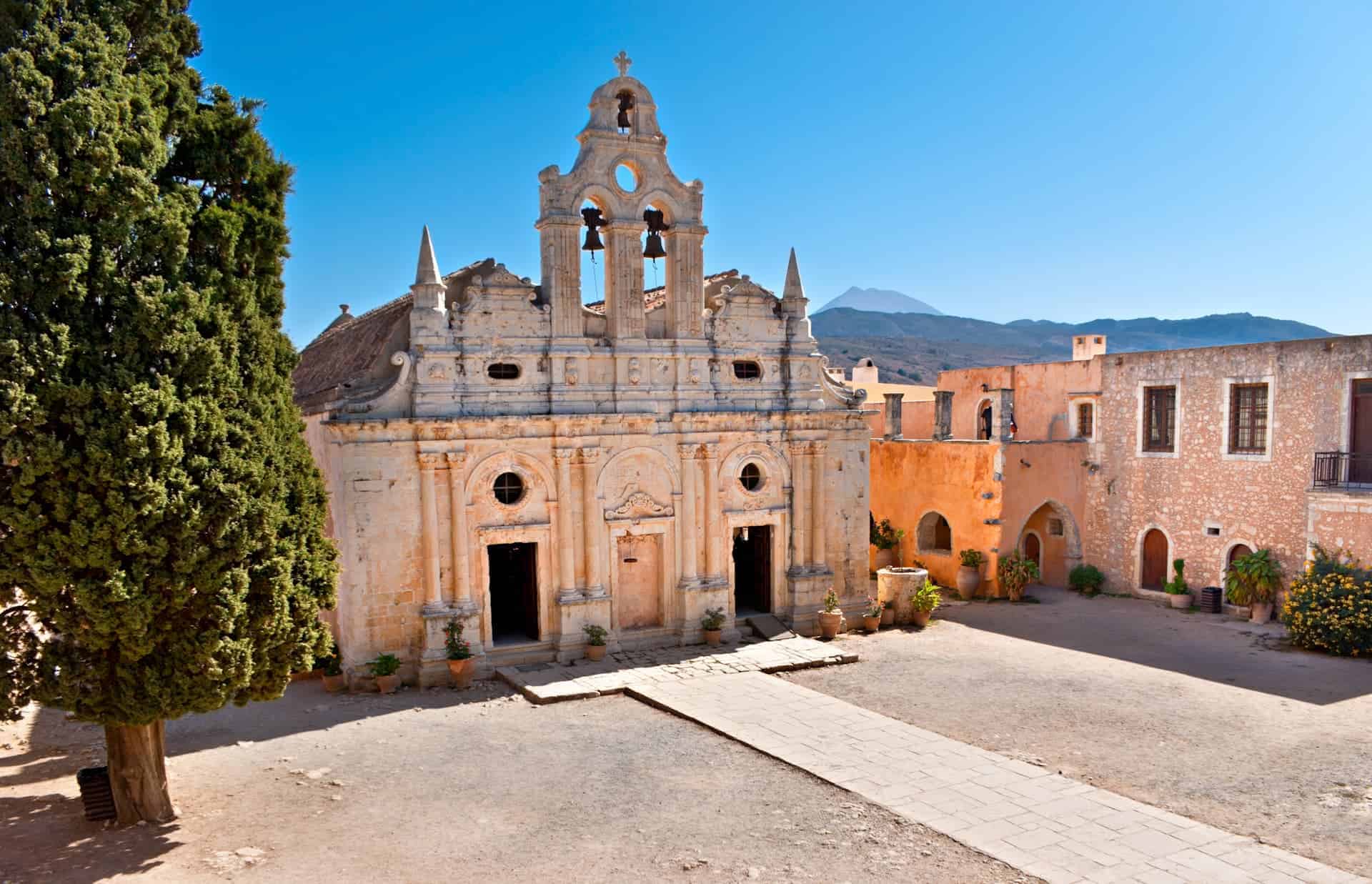 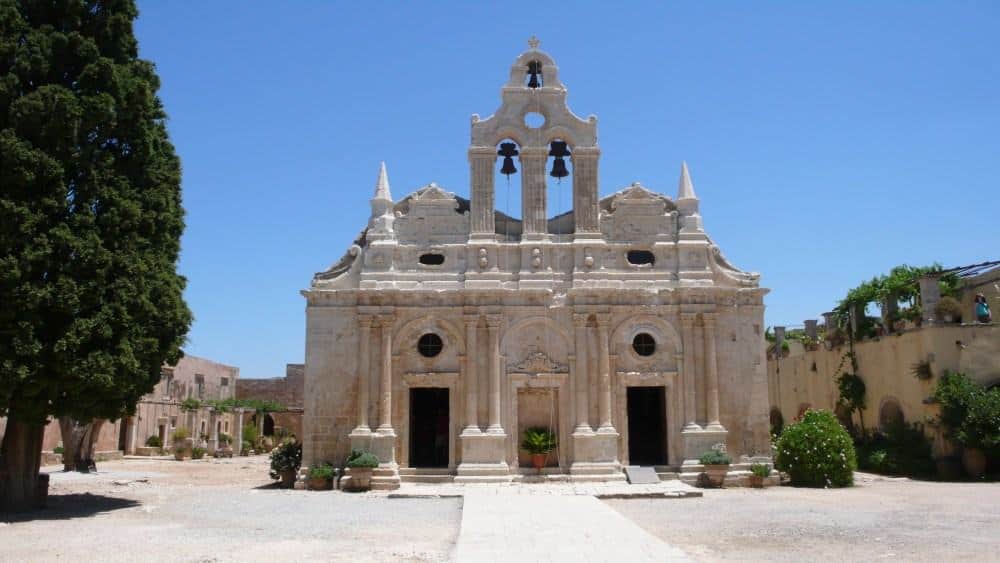 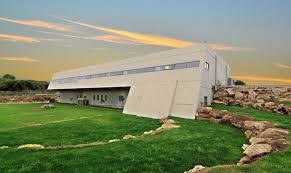 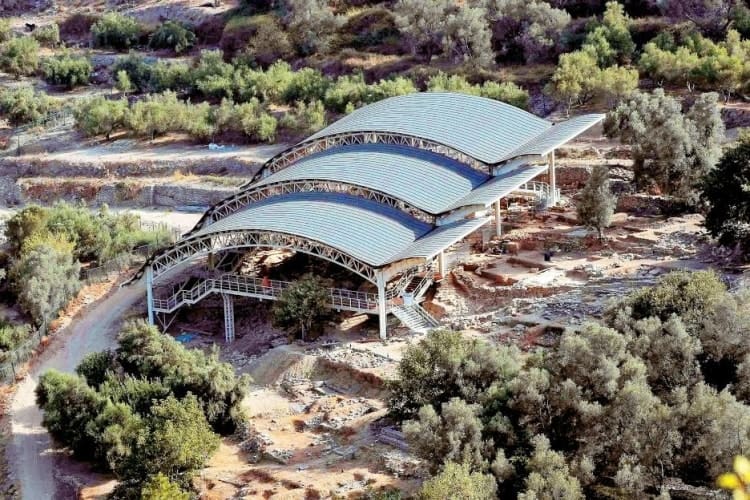 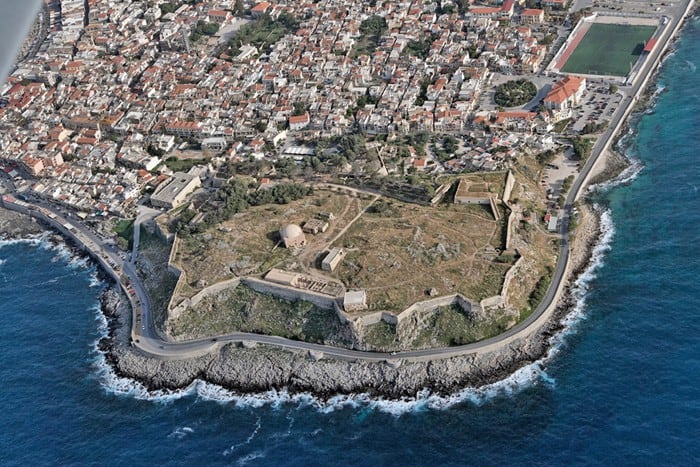 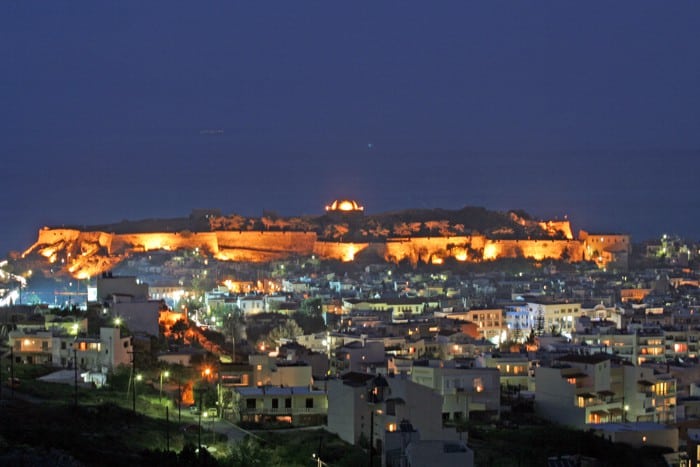 Rethymno is a city of approximately 40,000 people, the capital of Rethymno regional unit on the island of Crete. It was originally built during the Minoan civilization, but was never a competitive Minoan centre. It was, however, strong enough to mint its own coins and maintain urban growth. One of these coins is today depicted as the crest of the town: two dolphins in a circle. Today’s old town is almost entirely built by the Republic of Venice. It is one of the best-preserved old towns in Crete.
The town still maintains its old aristocratic appearance, with its buildings dating from the 16th century, arched doorways, stone staircases, Byzantine and Hellenic-Roman remains, the small Venetian harbour and narrow streets. The city’s Venetian-era citadel, the Fortezza of Rethymno, is one of the best-preserved castles in Crete.

The Arkadi Monastery is an Eastern Orthodox monastery. The current catholicon (church) dates back to the 16th century and is marked by the influence of the Renaissance. This influence is visible in the architecture, which mixes both Roman and baroque elements. As early as the 16th century, the monastery was a place for science and art and had a school and a rich library.
The monastery played an active role in the Cretan resistance of Ottoman rule during the Cretan revolt of 1866. 943 Greeks, mostly women and children, sought refuge in the monastery. After three days of battle and under orders from the hegumen (abbot) of the monastery, the Cretans blew up barrels of gunpowder, choosing to sacrifice themselves rather than surrender. The explosion did not end the Cretan insurrection, but it attracted the attention of the rest of the world.

Eleutherna, also called Apollonia, was an ancient city-state in Crete, Greece. The city’s location made it a natural crossroad, as it lay between Cydonia on the northwest coast and Knossos.
In the Museum of Ancient Eleutherna the exhibits span a period of three and a half millennia (3000 BC to 1300 AD) and include objects of art and everyday life from Prehistoric, Geometric, Archaic, Classical, Hellenistic, Roman and Byzantine years.
The Eleutherna Bridge is an ancient Greek corbel arch bridge near the Cretan town of Eleutherna.
The bridge which is still in use was first described by the Englishman T.A.B. Spratt in his Travels and Researches in Crete, after he had paid a visit to the site in 1853. While there is general agreement that the bridge of Eleutherna date to the pre-Roman period, a more precise dating is hampered by the lack of proper finds. According to Nakassis, the extant bridge was built sometime during the Hellenistic period, while the Italian scholar Galliazzo dates the construction more precisely to the end of the 4th or beginning of the 3rd century BC.